Container rates from North Asia to the Nordic continent surged to $12,000 /FEU in May, up $1,500 /FEU from the previous week and a nearly tenfold increase from the $1,300 /FEU assessed on the route a year ago.

In just a month, the short-term freight rates from China to Northern Europe have broken through the $20,000 /FEU mark, and the trans-Pacific to the West Coast of the United States shipping companies are quoting as high as $25,000. 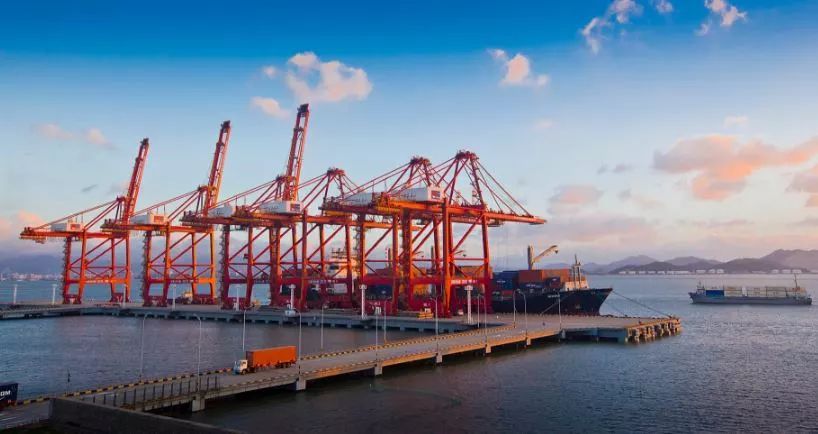 In July, the top five shipping lines offered $21,000 per 40 feet for cargo from Chinese ports to Felixstow and Southampton, with an average price of around $18,000, the data showed.

Although these sharply increased rates include extra fees to guarantee equipment and shipping space, some shippers complain that their cargo is still getting rolled.

“We paid them ridiculous fees and thought that was the end of the matter,” says one freight agent. “But then we found out from our local agent that the boxes were still on the dock and apparently there was another FAK markup on the next ship.”

As the season approaches, things look set to get worse for shippers heading to Europe and the US. They will need to be prepared for a new round of FAK and GRI price increases as well as thousands of dollars of PSS(peak season surcharges) from July 1.

One UK-based NVOCC said a “brief email” from his carrier suggesting another increase was like the “last straw”. “Even when they’re low in the industry, we’ve supported them through the rough times, and that’s how we get rewarded,” he says.

In the trans-Pacific region, shippers are also facing similar problems. Craig Grossgart, senior vice president of global shipping at Seko Logistics, has confirmed that a shipper last week offered a price of US$32,000 for a 40-foot container from Shanghai to Los Angeles.

Nonetheless, he stated that he has offered an offer of US$25,000 per 40 feet to a shipper who needs to ship 300 containers from Shanghai and Yantian to Los Angeles next month-“This is a serious offer.”

At present, the container shipping market is facing serious congestion, a series of problems such as hard to find one cabin, hard to find one box, and rising freight rates. Shippers and freight forwarders also hope that regulators can come out and intervene in shipping companies.

But the European Commission has said it refuses to take action against the overheated market.

Magda Kopczynska, the head of the European Commission’s maritime department, said recently, “From the Commission’s point of view, we are studying the situation, but I really don’t think we should rush into a policy decision and change everything that has worked well.”

Kopczynska made this statement at a webinar hosted by two members of the European Parliament, Jutta Paulus, Germany, and Vera Tax, the Netherlands.

This statement caused an uproar among all forwarders. Some organizations dominated by shippers had hoped that the European Commission could intervene in shipping companies in the face of soaring transportation, industry delays, and irregular supply chains. Some organizations in the logistics industry claim that more and more ships are putting pressure on those who must serve them.

With the gradual recovery of economic activities in Europe and the United States and the increasing market demand for various materials, import demand from Europe and the United States continues to remain high. However, the situation of container detention, ship jumping, poor transportation turnover and port congestion caused by the epidemic has become the norm, and it is difficult to break the deadlock of tight transportation capacity in the transportation market. On the one hand, the economy resumes demand growth, on the other hand, the epidemic has affected the capacity shortage, and the freight rate in the container shipping market continues to hit record highs.

Weak infrastructure is the biggest challenge in the container market, says MSC CEO

The challenge of congestion and the over-loading of terminals cannot be entirely attributed to the increase in demand during the COVID-19 pandemic. Søren Toft, CEO of Mediterranean Shipping MSC, pointed out that the container industry has been lagging behind in the development of infrastructure, which is also a major challenge for the container market.
“No one in the industry expected that the pandemic would cause the container market to heat up. Even so, the fact that the shipping industry’s infrastructure has been lagging behind has also triggered some of the challenges facing the industry.” Søren Toft at the World Ports Conference on Wednesday ( During the World Ports Conference), I talked about the bottlenecks encountered this year, the congestion of the ports and the high freight rates. 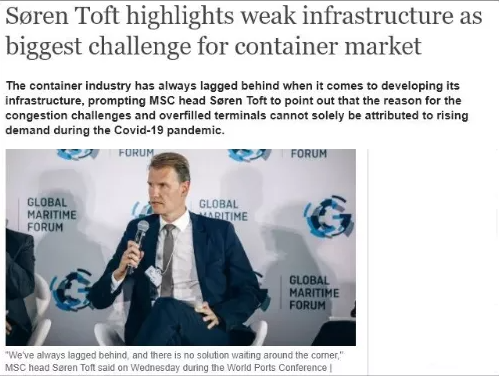 “No one expected the market to become like this. But to be fair, infrastructure construction has been lagging behind and there is no ready-made solution. But this is a pity, because now the business is at the highest level.”
Søren Toft called the past nine months “very difficult”, which has also led MSC to make the necessary investments, such as expanding its fleet by adding several new ships and containers, and investing in new services.
“The root of the problem was that the demand had dropped sharply before and we had to withdraw the ship. Then, demand soared again beyond anyone’s imagination. Today, due to Covid-19 restrictions and distance requirements, the port has been short of manpower for a long time, and we are still affected. “Toft said.
At present, the time pressure of major container ports in the world is very high. A week ago, Hapag-Lloyd CEO Rolf Habben Jansen said that due to market chaos, the peak season will be prolonged.
He said the current situation may cause bottlenecks and delays, and may make the already high freight rates even higher when the goods are prepared early on Christmas.
“Almost all ships are now fully loaded, so only when the congestion is relieved, the carrying capacity of the line will increase and the speed will slow down. If the demand is still picking up during the peak season, it may mean that the peak season will be extended a bit.” Habben Jansen said.
According to Habben Jansen, the current demand is so huge that the market has no prospect of returning to normal.